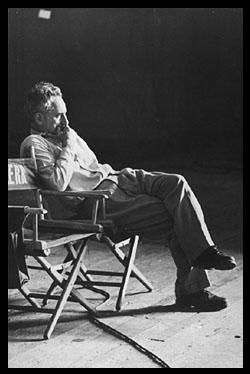 There are phases in the artistic life.

You will recall the young age, when you realized that you wanted to act or write or paint or dance. You're very young, and everything is a dream waiting to be fulfilled, and everyone who has created something that moved or amused or changed you is a hero, an idol, someone to emulate. Some people never get past this phase, and they will never believe that anyone--no matter how great--is ever as talented or worthy as those childhood idols.

This is one form of artistic suicide, and I see it often. You cannot allow your standards to calcify at that tender and impressionable age, set by what you loved in your bedroom when you knew nothing and furiously felt everything. Those loves and influences will be your foundation, the scaffolding upon which you add everything else, but it cannot be the end of your development.

There is then the realization, through the duck press that is the professional theatre, when you realize how much you do not know and how many things you cannot do or do well. You have two choices: You can deny the reality of your situation and look upon those who try to shape you or educate you as imbeciles or enemies, or you can look at yourself brutally and honestly and try to become the best artist you can be. An awful lot of people, the majority, sadly,-choose the former route, and they rail against the theatre or film or dance, and they maintain that they are so special that they cannot be understood by those who are sell-outs or favored or compromised.

This is another form of artistic suicide, and the victim of this pushes himself into a special corner that is sparsely populated, ignored, oxygen-free, and worthless.

The most vicious form of artistic suicide--and one that often turns into a form of murder of others--is that emanating from those who are failures at what they wished to achieve, and they circle, like vultures, over the attempts of others, hawking and shitting and pointing out the errors. Everyone is entitled to an opinion, no matter how strong or capricious or revolutionary, but you take the opinion you have formed--positive or negative--and you place it and what you have learned from it directly on your own work. You learn from the mistakes and the triumphs of others.

If you wish to shit upon the work of those who have actually placed a stake in the firmament and tried to do something, while you remain in your teen-aged dream state of what you think you can become or deserve to achieve, I don't want to hear it. No one wants to hear it. Show me what you've got. But if you want to reveal yourself as an amateur or a failure or a person miserly of heart and talent, circle and shit on what others are doing.

Suicides are repellent and immoral, but if that is the route an artist chooses, it should be private.

This lesson, which I share often, is why I am never asked to teach.

Most teachers want their students to remain adolescents locked in their amber dreams.

Watch everything. Learn from everything. Earn the right to make bold statements about what the workers are doing.

Live by these tenets.

Thank you for your comments. The moderators will try to respond to you within 24 hours.

Popular posts from this blog

June 30, 2012
I have always believed that I was in the act of writing comedies. Black, perhaps, certainly full of portent, but nonetheless comedies. I can't help but believe that if you can't find both the utterly tragic and utterly silly, the utterly insane and wonderful in life, you simply can't cope, and you certainly can't write. There is a vision in those people I consider to be artists that can see many sides and angles and colors to a character or a situation, and it is folly to exclude the comedic. Many do this, because there is a belief that the comedic is perched on some lower rung of the artistic ladder--that laughter is a cheap act; that seeking laughter is a mortal sin. I could not disagree more. People were always amazed that I laughed throughout Menagerie and Streetcar and Cat . Well, they're funny plays at times. People are funny many times. When Carol Burnett began to play Eunice on her program, I felt--happily--that my psyche had been broken into and a
Post a Comment
Read more

January 12, 2022
Bette Davis by Terry O'Neill. O'Neill has said: 'I took this in the apartment of Miss Davis - as she was always addressed - the year after her stroke. When I arrived she knew exactly where she wanted to be photographed ... and had chosen her gown. She epitomised the true professionalism of a special generation of brilliant Hollywood stars.'  There is an inability among actors--most actors--to be honest about this deal we have made with what we think is our art. It is rarely art, and when it approaches something like art, you are witnessing something that came about because of some serious battles, demands, and refusals. Here's the deal, and we have to own it: If people don't buy your dream of being an actress, then it will not happen. That is reality, and it's best to pack up and dream another dream. Or wait a while to see if you improve or tastes change, but no studio can or should employ you because you have a Goddamned dream or wish. I believed I was ta
Post a Comment
Read more

June 26, 2012
I find Carol Burnett's work almost impossible to watch at times--not because it isn't wonderful; it's almost always of the highest standard--but because she has that rarest of abilities: she is universally human, extraordinarily vulnerable, even when she is engaging us in the art of comedy. When I watch Burnett in even the silliest of skits, I see my mother, or an aunt, or my sister, or someone I just bumped into--she is so extraordinarily human. It is a quality that Laurette Taylor had, and that Maureen [Stapleton] has: I would venture to say that it is a trait that all great artists have. She possesses a connection to her audience that is remarkable. I was never happy with the production of Slapstick Tragedy , which I did not think was understood to be a black comedy. It was directed, and for the most part played, as the deepest of dramas, and everyone, myself included, leapt for the exits. Zoe [Caldwell] followed my script with an almost religious fervor, and
Post a Comment
Read more